Last night we performed Vivienne in the October Gallery as part of the Bloomsbury Festival. It was an important opportunity to try the piece somewhere that is not a dedicated theatrical space, and to discover how far towards a concert performance we can take the staging without losing its power.

Once again we had an appreciative and knowledgeable audience, and it seemed right that a performance of Vivienne should take place in Bloomsbury, with Eliot’s publisher Faber & Faber only a stone’s throw away.

Two more performances of Vivienne are taking place before the end of the year. The first, on Thursday 17 October at 6pm, is part of the Bloomsbury Festival and can be seen at the October Gallery. The advance tickets have now all been taken but there will be more available on the door.

The second and final performance of 2014 takes place in the Linbury Studio Theatre at the Royal Opera House, on Monday 25 November at 1pm, as part of the lunchtime recital series. Booking for this performance opens on 16 November. A proportion of the tickets is retained and available on the day.

Tickets for both performances are free.

We have finished the second of two performances of Vivienne at The Forge, Camden as part of the Camden Festival and so the summer run of Vivienne has come to an end. The positive reception of this short but concentrated music theatre piece has justified all the hard work that went into bringing it to the stage. On both nights at The Forge the audience stayed after the curtain calls to speak us about their experience. Clearly Vivienne is a strong, involving work and many people wanted to share their impressions of a personal connection formed with me in the role of Vivienne, and to praise the contributions of Libby at the piano and Joe in shaping the piece and my performance.

Vivienne has been a very successful collaboration for the whole McCaldin Arts company. Building on previous experience of working together and a mutual understanding of each others’ abilities and strengths we have created something rich, powerful and – importantly – entertaining.

I’m also indebted to a number of family, friends and acquaintances (all listed in this week’s programme) who supported this production, not least via the Kickstarter crowdfunding campaign that ensured a properly staged production. It’s been wonderful to see a number of those who have supported Vivienne in this way also coming to see the show.

A comprehensive digest of published feedback on Vivienne can be read here via Storify. We have also read the latest print edition of the New Statesman which described Vivienne as “a treasure”, Andy Rashleigh’s libretto as “witty and endlessly allusive” and the Tete a Tete Opera Festival show as “elegantly performed by mezzo-soprano Clare McCaldin and the pianist Elizabeth Burgess”.

Vivienne will return in the Autumn at the Bloomsbury Festival in October and at the Royal Opera House in November.

We are in the eye of the storm of rehearsing Vivienne, turning her turbulent life and world-view into the half hour stage show that debuts in a week. As usual, working in the rehearsal space with our director Joe Austin has opened up a torrent of ideas and we must now work through them and refine the production to create something focused, purposeful, honest and communicative. The music is a real dressing-up box of styles and moods, by turns fiery, fervent and fun.

Both summer festivals at which we are presenting Vivienne have now started; it is possible (and cheap!) to come to other productions at both the Tete-a-Tete Opera Festival and the Camden Fringe immediately prior to Vivienne. Here’s the booking information. There’s plenty to see and discuss at these arts festivals – it would be lovely to see you.

Following the positive reception of McCaldin Arts’ debut CD, the company has moved on to developing work for production later in the year.

Haydn’s London Ladies – a narration & song account of Haydn’s professional and personal relationships with women during his time in London, away from his unhappy marriage – is approaching its final draft. We begin rehearsals soon for the performance on 25 May.

Stephen McNeff & Andy Rashleigh have been working on the innovative and hugely exciting stage work Vivienne with a view to giving a first performance as part of the Tete a Tete Opera Festival in August 2013 and subsequent performances in the Camden Fringe.

The first performances of A Voice of One Delight took place last week and I am thrilled by the level of enthusiasm with which they were received. We were very fortunate in attracting the resources to bring the piece to a high-level of finish before putting it in front of an audience and this has allowed us to get detailed feedback about how the production ideas support the narrative. For more photographic images by Claire Shovelton and a link to watch the work on video, go to the A Voice of One Delight webpage. 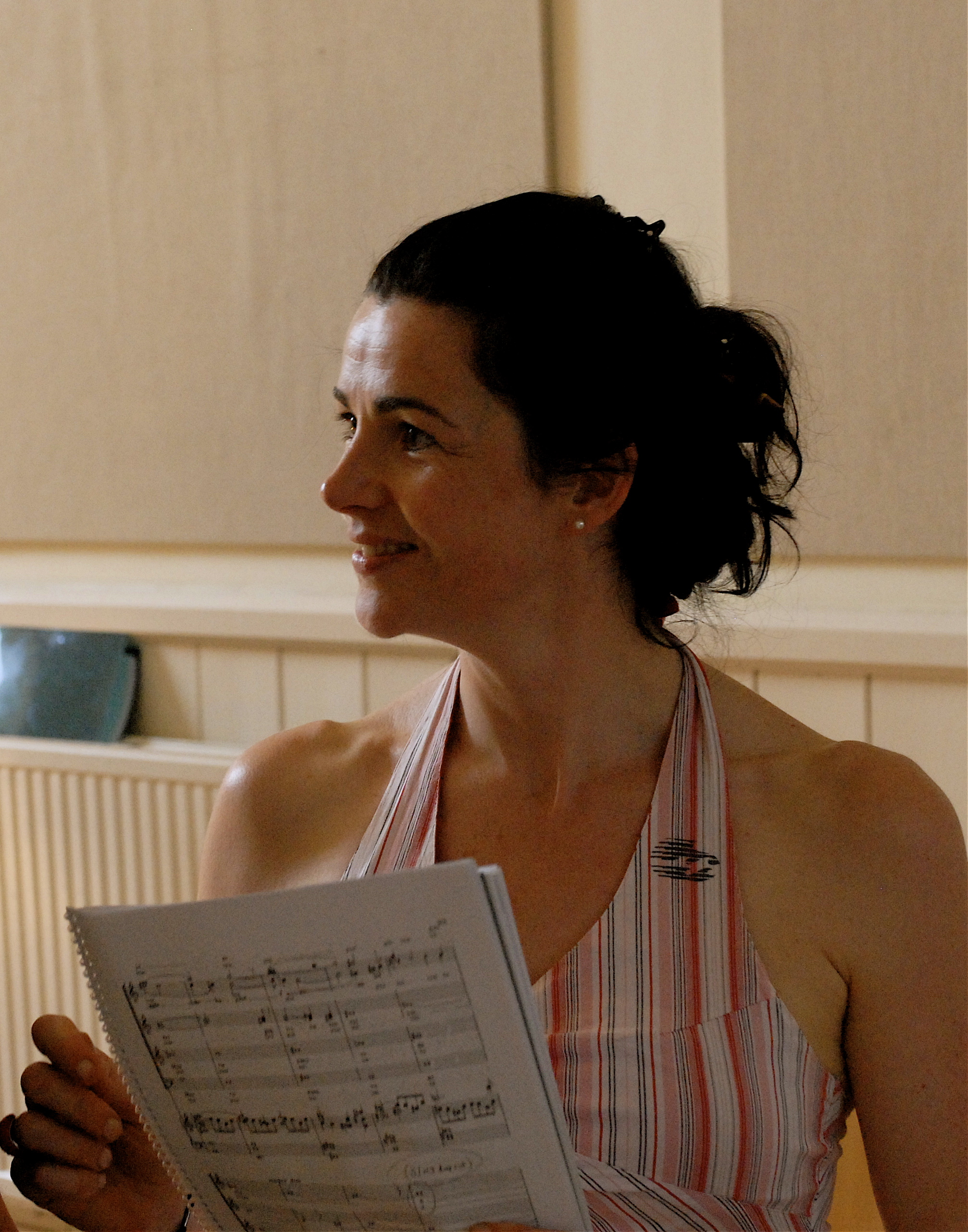 In addition to my work with McCaldin Arts and as a solo artist (see www.claremccaldin.com) I also write an occasional blog for The Singing Entrepreneur, an online trade forum for working singers. My latest piece, Lady! Step away from the list concerning the making of A Voice of One Delight is now up. You can read it here at www.thesingingentrepreneur.com.

Rehearsals have been progressing very well for A Voice of One Delight, which gets its first performances later this week at Tête à Tête: the Opera Festival.

Here we are at the Jerwood Space, deep in thought about character, time and space. The usual Sunday morning challenges.

From L to R: me, Petra Söör (choreographer) and Joe Austin (director). The picture is a pianists-eye view taken by Libby Burgess.

The full line-up of the 2012 Tete-a-Tete Opera Festival has now been announced. Running from the 2-19 August, the McCaldin Arts production of Steven McNeff’s A Voice Of One Delight is being shown on the evenings of 16 & 17 August.

Time Out magazine carried details of the festival in their London edition earlier in the week.

The team producing A Voice Of One Delight has now started to rehearse in preparation for its two performances as part of the 2012 Tête-à-Tête Opera Festival.

(For other biographical notes on the production team, please see the Company page of this site).