On the eve of this new year I have paused to consider that 2015 is the 100th anniversary year of TS Eliot’s marriage to his first wife Vivienne Haigh-Wood – and the 50th anniversary of the poet’s death.

Vivienne’s life and relationship with Eliot were the subject of my successful staged cycle of songs in 2013, called Vivienne. I was subsequently invited to perform the cycle of Stephen McNeff’s settings of Andy Rashleigh’s lyrics at the 9th TS Eliot Society Festival in Little Gidding. (McNeff and Rashleigh already have form working on TS Eliot, having written a musical version of The Wasteland for the Donmar in 1994.)

I intend to give a performance of the piece around the time of the anniversary of Tom and Vivienne’s wedding on 26 June 2015. Plans are also well advanced for a recording of the cycle with pianist Libby Burgess, in a programme I have chosen around related themes. More news on this in the next few weeks.

The BBC is to mark the anniversary of TS Eliot’s death on 4th January with a programme of readings and music on Radio 3 from 5.30pm. Eliot is among the three most quoted poets in the English language and I’m looking forward to seeing and hearing other peoples’ artistic responses to his work throughout 2015.

The Royal Philharmonic Society Awards were presented this week and the popular winner of the Chamber Music and Song award was Champs Hill, the venue in Sussex created and run by David and Mary Bowerman. The purpose-built concert hall has hosted many established and emerging artists over the years and, more recently, has become the main recording venue for the Champs Hill Records label. Having recorded my CD, Madrigali dell’Estate, at Champs Hill and experienced Mary and David’s great care and hospitality at first hand, I can only say that they are very deserving winners!

Fantastic news today from the RVW Trust that it will be supporting Vivienne with a grant.

The Trust has been a staunch supporter of my previous collaborations with Stephen McNeff, having contributed to the commissioning costs of the Madrigali dell’Estate song-cycle and the artists’ costs for the CD of the same name that features that piece.

My thanks to the Trust for its continued support of our work.

Two fantastic reviews for Madrigali dell’Estate appeared this week, giving the profiles of me and Stephen McNeff a timely nudge just as we are launching the publicity and Kickstarter fundraising campaign to complete Vivienne for performances this August.

Hilary Finch gave us four stars in BBC Music Magazine and applauded my “real commitment and imagination” delivering the “sensuous, sensual energies of the words, moving between supple, heightened arioso and athletic lyricism”. She especially seemed to like the “brilliantly backlit cameos of sand and tide, shore and slimy estuary” of the Madrigali songs themselves, and the “irrestistible Abruzzo folksongs”.

Hot on the heels of our well-received disc of music by our friend and collaborator, composer Stephen McNeff, we are delighted to hear of another significant CD release of his music. The Bournemouth Symphony Orchestra and Chorus under the direction of Dominic Wheeler has made a recording of a number of works that Stephen wrote during the period of his appointment as PRS Composer in the House with the orchestra (2005-2008). The works included are Sinfonia (2007), Heiligenstadt (2005), Weathers (2007) and Secret Destinations (2005). The disc is on the Dutton Epoch label, from whose website it may be ordered.

It’s with a huge sense of pride – and no little relief! – that I can consider my debut CD recording Madrigali dell’Estate released for purchase or download. I have had great pleasure in handing copies to the artists involved on the project and to those individuals and companies without whose generous support the recording would not have been made.

Champs Hill Records has a dedicated page where the disc may be downloaded in full or as individual tracks, or ordered as a physical CD. Amazon also has the disc and its individual tracks for sale. The disc has also been reviewed by the respected composer and writer Robert Hugill for his Planet Hugill blog. He found the recording

“daring and striking… wonderfully enterprising in its repertoire and superb in execution.”

If you have any question regarding the disc, or would like a proof copy for review please contact me in the first instance at mccaldinarts [at] gmail.com.

We move ever closer to the finished version of the Madrigali dell’Estate CD. The artwork is complete and the edit and liner notes are being fine-tuned. It seems a good time to share some of the record in a short promotional video in which the composer Stephen McNeff and I talk a little about the music and the recording.

We have just finalised the cover design for the Madrigali dell’Estate CD and I am delighted with it. The rich, orange sky as the sun sets over a rocky promontary suggests the flavour of the cycle which gives the CD its title. The sensuous songs of Madrigali dell’Estate are thick with sun and heat, sea-salt, and the sweet rottenness so characteristic in Mediterranean countries, of late summer giving way to autumn.

Recording a CD at Champs Hill is a rare and special experience: aside from looking after the artists themselves, our generous hosts care for the support team that includes composers, recording engineers and producers, so that everyone can fulfil their role with ease and good humour. As well as the beautiful concert hall that doubles as the recording space, the surrounding environment is filled with art and sculpture, providing inspiration and something to focus on when the head is too full of music. Three full days of recording solo vocal music was never going to be easy, but it could not have been more fun and we got everything in the can with time to spare. My thanks, again, to Mary and David Bowerman, the RVW and Finzi Trusts and my anonymous donor for making it possible.

Welcome to McCaldin Arts, the web home of productions from Clare McCaldin & company. Here you will find information about past, current and upcoming productions. 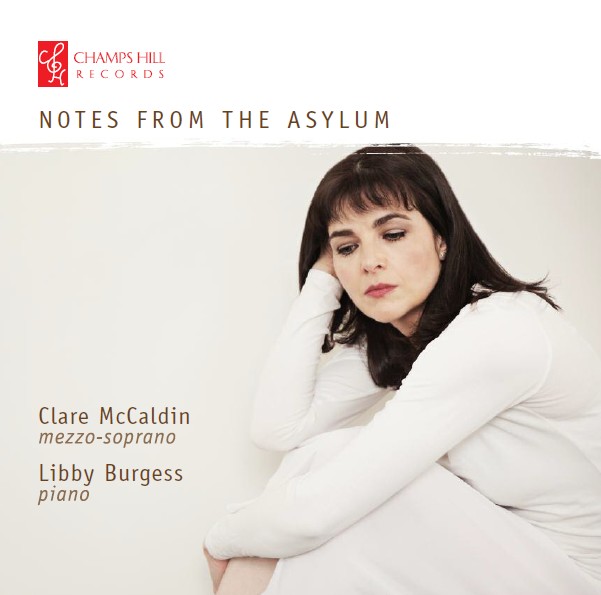